Peterson’s Connoisseur’s Choice is an aromatic blend that has a Caribbean feel to it, with fruity pineapple, coconut, vanilla, some citrus and a helping of fine rum.

It utilises a blend of gold and red Virginias, Black Cavendish and the ribbon cut is mixed with broken flake. While smoking this tobacco it is clear there is flavouring added but it isn’t an unnatural flavour that argues with the leaves it’s put on or the palate. Although some tobaccos overindulge on the alcohol flavourings, Connoisseur’s Choice pipe tobacco has the balance just right.

This blend is recommended to all, from the beginner to the expert, from the aromatic enthusiast to the tobacco purist. Everyone can find something to enjoy in this mixture.

Once you’re into the tin, you’ll receive a modest aroma of spice, fruits and a hint of rum.

This carries forward into the smoke too. If you have time before you tuck into the enjoyable tobacco, you’ll notice broken flake within the folds of ribbon. The golden brown, reddish browns and blacks remind of a chocolate dessert, and certainly, this blend is a great dessert smoke.

Also, if you have company, they will hopefully enjoy the scent almost as much as you do. 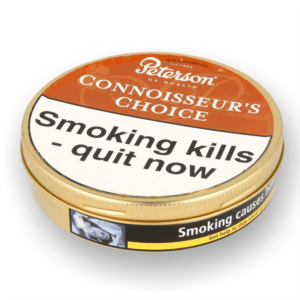 You're viewing: Connoisseurs Choice – Petersons Tins – 50g £17.80
Add to basket
Sign in Create an Account
Lost your password?
Select the fields to be shown. Others will be hidden. Drag and drop to rearrange the order.
Click outside to hide the compare bar
Compare
Shopping cart close