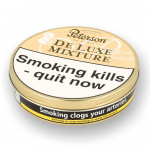 Peterson’s De Luxe Mixture is an aromatic blend of Black Cavendish and Virginia with a mild topping of Vanilla, Walnut and Honey. The flavours of the tobaccos work in tandem with the added flavourings which brings out the best in both.

The sweetness of the Black Cavendish, honey and vanilla complement the slightly savoury Virginias and Walnut to give an overall medium-sweet smoke.

This is not necessarily a dessert smoke as it’s sweetness is milder and more subtle but it works well in a breakfast pipe with a good cup of coffee.

The Virginias are from Brazil and Africa, mixed with a loose cut Black Cavendish to give a light tobacco blend that’s easy to pack and light.

Out of the tin, the aroma is of sweet caramel nuttiness with a subtle honey piquancy. There’s an array of dark browns to blacks with flecks of golden brown to tempt the eye.

The room note of this tobacco is pleasant and may be enjoyed by others around.