Ribbon cut and so easy to pack a pipe with, it’s a pleasure in itself, with the fragrance of a log burning fire alongside the sweetness, it’s like Autumn any time of the year!

If you like your Latakia blends, you’ll love this!

This may be a sweet English mixture, or maybe it should be classified as a Scottish mixture?

Either way, it’s not overly sweet. It has some fermented flavours as well, acidity in the background that you may detect, which compliments the woodiness, the spice and the citrus elements of the respective Latakia, Oriental and Virginia.

There’s creamy nuttiness in here too. All together very enjoyable. 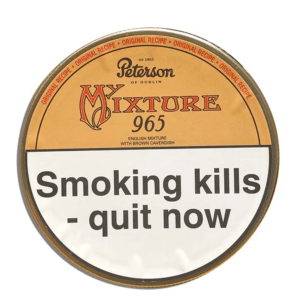 You're viewing: My Mixture 965 – Petersons Tins – 50g £17.80
Add to basket
Sign in Create an Account
Lost your password?
Select the fields to be shown. Others will be hidden. Drag and drop to rearrange the order.
Click outside to hide the compare bar
Compare
Shopping cart close