The Serie D linea has recently expanded with the introduction of the Serie D No. 5.

This short format cigar, allows this exceptional new size to reveal the unique flavours of the brand in a  relatively short time.

If there is one particularly famous cigar factory in Havana, it is Partagas, which lies in the heart of Havana city. The factory was opened in 1845 by Don Jaime Partagas and it has been making the cigars that bear his name ever since. A Partagas is immediately recognisable by its deep earthy flavour. The specially selected tobaccos from Vuelta Abajo are chosen for their unmistakable richness of flavour and aroma.

Be the first to review “Partagas – Serie D No.5 Tubos 3’s” Cancel reply 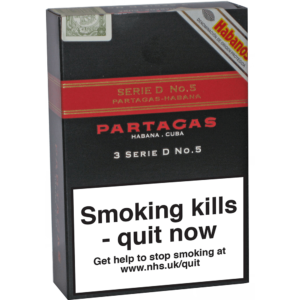 You're viewing: Partagas – Serie D No.5 Tubos 3’s £66.90
Add to basket
Sign in Create an Account
Lost your password?
Select the fields to be shown. Others will be hidden. Drag and drop to rearrange the order.
Click outside to hide the compare bar
Compare
Shopping cart close