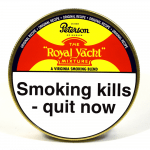 Peterson Royal Yacht is Virginia based, with a unique flavour added that reminds a little of plum, raisin and Perique without some of the pepper quality.

It’s made from the best selected Virginia leaves, from lemon and bronze to richer, fuller-bodied varieties. They are naturally sweet because they have been well conditioned and matured but the topping is lightly sweet too.

Smoked slowly, you can appreciate this tobacco to its fullest, it burns cool, smooth, doesn’t bite and delivers consistent strength.

The bowl progresses slowly towards a sweeter end.